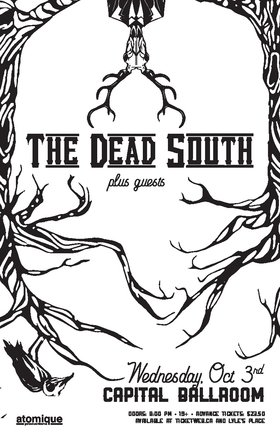 Music: Country / Bluegrass / Rockabilly, Pop / Rock / Indie
The Dead South have been described as outlaws and modern hillbillies, but the best way to describe the Regina-based band is fearless. They’re a rare musical commodity – a band that’s equally compelling on record as they are on stage.

While The Dead South’s signature blend of bluegrass and classic folk is familiar, it’s also eminently fresh; fuelled by the kind of energy and ethic you’d associate with a punk band. “A lot of our inspiration comes from an old school feel, but our sound is an amalgamation of the we all like, and the punk influence is definitely there,” says vocalist/guitarist Nate Hilts.

Since the release of their second record, Illusion & Doubt (Curve Music/Entertainment One), in late 2016, The Dead South have proven themselves a force to be reckoned with on both sides of the 49th parallel.

Illusion & Doubt recently hit Top 5 on the US Billboard Bluegrass chart and entered the top 30 on the US Country iTunes Chart. That’s fuelled interest in the band’s debut, Good Company, as well, which, though released in 2015, recently hit the Top 50 On Billboard and the Top 20 on US iTunes overall chart

The boost to both albums, Hilts believes, is partially due to the band’s video for ‘In Hell I’ll Be In Good Company,’ which was released in early 2016. “We were late to the game getting videos out for Good Company in general and after we did the ‘In Hell’ video in 2016 we concentrated on releasing Illusion & Doubt and put the video on the back burner. But, a few months after we released it, there was just this huge… BOOM.”

Fueled By Wine and cigarettes this former Staggers front man is back to grab you by the balls and make you fall in love with his music, when your influences include Steve Earle , Ryan Adams , The Ramones , The Velvet Undergound , The rolling Stones and The blacks Halos to name afew, you can only imagine the sound that ensues. With a promising live ... more info

Del Suelo is the pseudonym of Erik Mehlsen, who has spent the better part of the last decade touring as a member of the internationally successful The Dead South, winning a Juno Award in 2018, and performing with and writing songs for The Andino Suns, winning a WCMA in 2017. Fans have been waiting patiently for a follow up to Del Suelo’s breakth... more info
Videos: