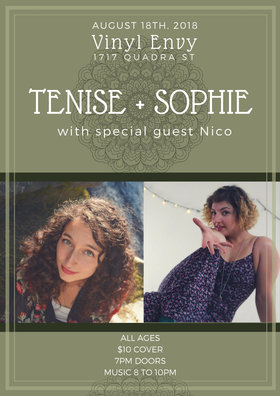 Sophie D’Orléans:
Sophie grew up in Chapel Hill, a suburb of Ottawa. After studying social work, anthropology and travelling all over South America, she spent three years in Nelson, BC, studying music. Since 2016, she's been the songwriter, lead singer and keyboardist of The Sophistocrats. This is her first tour as a solo act and she’s added French songs to her set!

Tenise Marie:
Tenise Marie is a 23 year old singer-songwriter from Argenta, BC. Her musical influences are a cross-pollination of Contemporary Pop and the confessional songwriting of Bob Dylan and Joni Mitchell. In 2015, Tenise Marie graduated from the Contemporary Music & Technology program at Selkirk College with a diploma in Performance. With generous funding support from the Columbia Basin Trust and the Columbia Kootenay Cultural Alliance, she released her debut record "Oxygen" in April of 2016. In May of 2017, Tenise Marie completed her first tour, a Columbia Kootenay Cultural Alliance and Columbia Basin Trust funded project, comprised of eight dates performed in B.C. and Alberta. Tenise is in the process of producing a new recording project of original music, funded by the The Columbia Basin Trust and the North Kootenay Lake Arts & Heritage Council. The project's title track, "The Sailor & The Gypsy", was nominated for 2018 Kootenay Music Award.