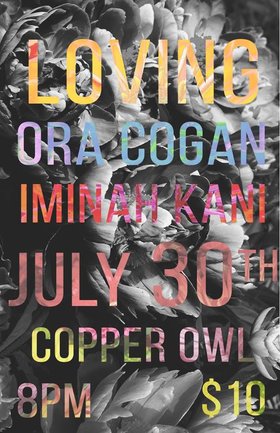 Loving is a Victoria basement-based trio comprised of David Parry, and brothers Lucas and Jesse Henderson. The group came together several years ago as a result of their shared summers working in the capitalist ruins of British Columbia’s forests. Together they create a warm and dreamy sonic landscape kept adrift by existentially-oriented lyrics and an unspecified, encompassing sense of nostalgia. The group is presently adding the finishing touches to their first LP, slated for release in late 2018.

"Cogan can be strikingly sparse and overwhelmingly composed in the same sublime breath. She summons orchestral waves of violins and rolling psychedelic guitars, propelled forward by a voice that sweeps audiences away under a tsunami of blissful sonic complexity." - Sled Island Festival

Cogan’s new album 'Crickets' was recorded in Philadelphia with Tom Deis & released on Hand Drawn Dracula in November 2017. This complex & political record has married the intricate and atmospheric style this artist is known for with bold new arrangements that stretch out across many a sonic realm.

Iminah Kani is a west-coast, island girl who creates beautiful music with elements of flamenco, folk-noir, psych and experimental sounds. Her guitar creates the foundation upon which she builds layers and plays soulfully.

Loving is the collaboration of David Parry and brothers, Lucas and Jesse Henderson. The band came together several years ago as a result of their shared summers working in the capitalist ruins of western Canada’s forests. The seven tracks that came to form Loving’s eponymous debut EP were written and recorded between Victoria and Toronto in the... more info

Ora Cogan is a multi-disciplinary artist and singer-songwriter based in Victoria B.C. She is known for her singular voice and cinematic compositions. While migrating between several cities and towns over the past decade, she has released seven albums and toured extensively throughout Europe and North America. Cogan has collaborated with a multitude... more info
Submit info on this show to our admins