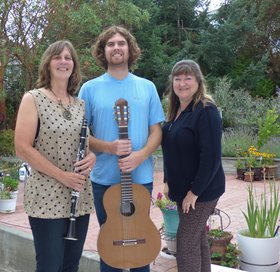 Resonance is an ensemble featuring
Lisa Tinney (soprano) and Kathryn Le Gros (piano and clarinet) with invited guests to perform thematic concerts, such as German lieder or Spanish Song. Our guest for Amor is Alex Jang (guitar). There will be lively, soothing and rhythmic Spanish music from Medieval times to the 20th Century.

Kathryn Le Gros:
After graduating Wilfrid Laurier’s Bachelor of Music program with a major in two instruments, Kathryn Le Gros co-founded the Kitchener Waterloo Chamber Orchestra. In Victoria, Cathryn has played in classical and jazz quartets and quintets, as well as performed with singers and other instrumentalists.

Joshua Amendt-Moylan, is the latest addition to this band for this night:
Joshua has a B. Bus and is currently pursuing his Masters degree at the University of Victoria. He teaches guitar and ukulele, and performs classical, acoustic, and electric guitar. He currently plays in a video game theme band called Flipside, which features video game classics such as Mario Bros, Zelda, and Final Fantasy.
His passion is to play compelling music of various genres, performing and recording in a wide range of styles including classical, jazz, rock, folk, pop, country.

Lisa Tinney:
Lisa Tinney holds a B. Mus. from U. of A. and an M.A. from U-Vic in Classical Voice and History. Her areas of specialization are Spanish Art song, lieder, 20th Century, and Baroque repertoire. Lisa has sung in operetta, dinner theatre, and musical theatre reviews. A member of the local chapter of National Association of Teachers of Singing, Lisa has been teaching voice in the Victoria area for over thirty years, focusing on healthy vocal technique across musical styles.

You can also read more about our music nights on:
http://highlands.bc.ca/323/Highlands-Music-Coffee-House

We encourage for environmenatl consideration to please bring along your own mug for coffee/tea :)

This evening is going to ba concert. And so the cost is 10.00/person.
Children under 15: free