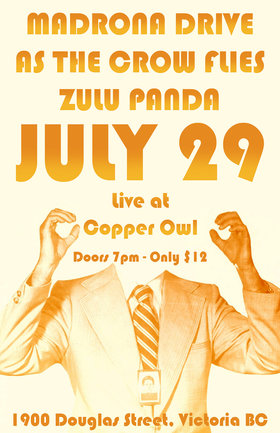 Madrona Drive - Based out of Deep Cove, the group of five is frequently busy writing, recording and performing new music. Forming in 2014 the band has been slowly developing their sound and working their way through the Vic music scene. Madrona Drive's sound could be described as a mixture of indie folk, rock and pop. With layers of vocal harmony and a tight bass and drum duo the band will leaving a lasting impression.


(asthe) crow flies-We've been working in Victoria for about 8 years. The pocket started out solid and has only matured. As a rock band we've played most every stage in Victoria and neighbourhood. We have toured as far as Calgary, garnering high praise at every stop. Our membership is battle-hardened, playing in such luminary projects as Carolyne Mark and Her New Friends, Ball Gag n' Chain Gang, The Ghostbirds, and Compassion Gorilla. Our eponymous self-titled album received a very warm reception from the Victoria community and sells well at every show.

Zulu Panda is folksy charm and raw passion, delivered with an outstanding live presence. Hailing from Vancouver BC, this indie-rock singer-songwriter performed in every province and territory to commemorate the 150th anniversary of Canada in 2017. His music combines heartland rock with grunge while maintaining a pop sensibility. His dynamic sound is matched nicely with warm melodies and Dylanesque storytelling. He is a troubadour of sound, stage and beard. He will be touring Canada from April to August of 2018.

As The Crow Flies

As the Crow Flies is a band that can fill a room with living sound. Their poetic lyrics, swelling harmonies, tight arrangements and skilled improvisational jams have been opening the hearts and enervating the feet of audiences for over a year. Playing packed shows to extremely appreciative crowds, in venues as seemingly disparate as the Victoria F... more info

Zulu Panda is the indie-rock solo project of Vancouver singer-songwriter Wesley David Scott. His music combines elements of heartland rock with grunge while maintaining a pop sensibility. His dynamic sound is matched nicely with warm vocal melodies and dylanesque storytelling in lyrics. This past year, he released his first full-length album entitl... more info
Submit info on this show to our admins