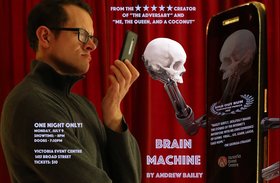 Music: Theatre:
Fringe and local favourite Andrew Bailey gives a ONE NIGHT ONLY performance of “Brain Machine”, a solo show that interweaves the story of the Web’s creation with his own tale of going viral online. “Brain Machine” premiered at the 2017 Vancouver Fringe where it SOLD OUT ITS RUN. “Brain Machine” plays Monday, July 9 at the Victoria Event Centre (See below for accessibility policy). Tickets are $10, at the door only. Doors at 7:30. Show at 8pm.

Three of humanity’s greatest minds spend nearly five decades on their brain machine, hoping to augment the human intellect, bring true “harmony and understanding” between peoples, and prevent thermonuclear war. Humankind uses the invention to attack intellectualism and raise Donald Trump to leader of the free world. Andrew Bailey, a technophobe who lives in a cabin in the woods, writes a satirical monologue attacking the trope that men being sexually assaulted is hilarious. The monologue goes viral, and the aftermath nearly drives Andrew insane.