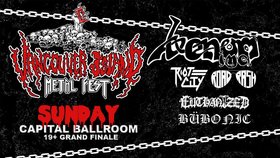 Music: Punk / Metal / Hardcore
Headlining this year's festival is the legendary Venom Inc! Venom Inc consists of two of the three members of VENOM's classic lineup, the band responsible for the title "Black Metal" and for pushing Heavy Metal beyond NWOBHM, setting the stones for extreme metal as a whole. They are going to be performing a special 3 HOUR long set jam packed with every song you want to hear.

With them, are Vancouver's motor-charged maniacs Roadrash - band, Calgary's RIOT CITY, as well as locals Euthanized, and the hometown debut of Bubonic (members of Holocaust Lord, Euthanized, Buzzard).