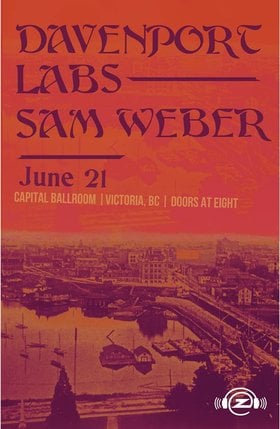 Based out of Victoria, BC, Davenport began in 2011 as a new project from front-man Peter Day and twin brother Patrick. Their music, however, began long before than that. As far back as they can remember they had been playing music together, recording and editing tracks on a Davenport sofa in their garage that would eventually become the namesake for the band.
Their first full-length LP came in 2014 with Applying Strategies to Matters of the Heart, which saw them featured as a Zone @91.3 Band of the Month in Victoria, BC. The albums strong vocal melodies and sustained, ethereal guitar riffs initially defined their sound as they began playing venues and festivals around Victoria and Vancouver Island like Rifflandia and Tall Tree Music Festival. In 2018, Davenport has been joined by a suite of musicians from across the country, and they are introducing their music to Canada and beyond with a new, more polished sound propelled by percussive rhythms and driven synths.

2018 is slated to be a breakout year for Davenport. The group is currently in the final stages of production for their second full-length LP, produced by friend and fellow BC musician Sam Weber. The band is embarking on their first cross-Canada tour this April with extensive touring planned throughout 2018. The band is excited to get on the road and share the fruits of their labor: the music that began as two brothers just making music in their garage.

4 piece electro-indie-pop act from Victoria BC, Canada. LABS began as an experiment in 2014 between vocalist, Lindsay Bryan and producer Adam Sutherland (keys and guitar live). The intention was to create stock samples for electronic music producers, however, the demos quickly became full songs and thus, LABS was born. Drawing influence from acts like St. Vincent and Phantogram, the bands sound contrasts high-fi to lo-fi analog synth and guitar tones, hooky melodic vocals, big drums and rich bass tones. The band was joined by a keyboardist, Matt Longpre, and drummer, Keenan Murray in the summer of 2015.