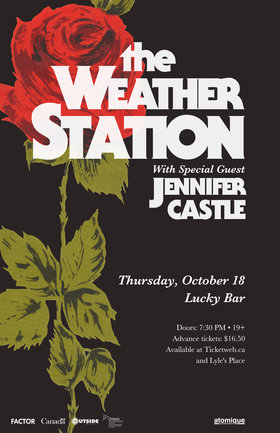 Music: Pop / Rock / Indie
The Weather Station is the fourth—and most forthright—album by The Weather Station, the project of Toronto songwriter Tamara Lindeman. Her most fully realized statement to date, it is a work of profound urgency, artistic generosity, and joy. Self-titled and self-produced, the album unearths a vital new energy from Lindeman’s acclaimed songwriting practice, marrying it to a bold new sense of confidence.

“I wanted to make a rock and roll record,” Lindeman explains, “but one that sounded how I wanted it to sound, which of course is nothing like rock and roll.” The result is a spirited, frequently topical tour de force that declares its understated feminist politics, and its ambitious new sonic directions, from its first moments. On past records, Lindeman has been a master of economy. Here her precisely detailed prose-poem narratives remain as exquisitely wrought as ever, but they inhabit an idiosyncratic, sometimes disorderly, and often daring album that feels, and reads, like a collection of obliquely gut-punching short stories.

Her previous album Loyalty was recorded at La Frette Studios in France in the winter of 2014 with Afie Jurvanen (Bahamas) and Robbie Lackritz (Feist). Nominated for the 2015 Polaris Music Prize, it earned praise from The Guardian, Pitchfork, NPR Music, Uncut, and MOJO, among many others, who celebrated its delicate, carefully worded verse, filled with double meanings, ambiguities, complex metaphors, and rich details of the everyday.

Lindeman and her band have toured extensively in North America, Europe, Australia, and Japan, both as a headliner and as support for artists such as The War on Drugs, The Mountain Goats, Damien Jurado, Bahamas, and Basia Bulat.