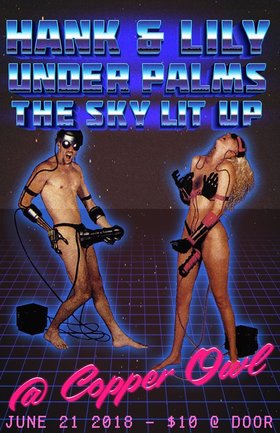 Music: Electronic / DJ, Pop / Rock / Indie
A trio of Victoria's own home brewed bands.
Hank & Lily return from the comic page to bestow upon you the blessing of their infamous and perverse swamp rock...and perhaps a few rap numbers.

The Sky Lit Up return from a long hiatus to bring you mesmerizing psychedelic compositions of Eric Hogg and his band of virtuoso musicians who do not mess around when it comes harmonic tension.

Under Palms bring the sun and the slackness. Former MeatDraw front man, Marco Bozenich, sums up life on the coast in a tight little rock song packages postmarked from the 90s.

The Sky Lit Up (rock/pop/prog/alt/indie/experimental/psychedelic)