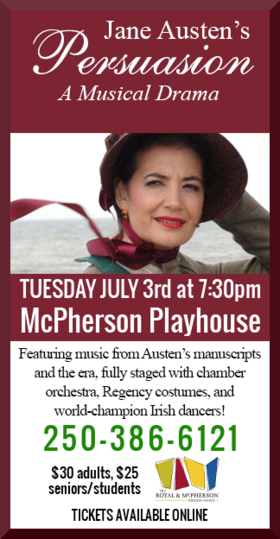 Music: Classical Theatre:
This original musical adaptation has toured multiple UK and US cities over the past five years and was a popular event at the Edinburgh Fringe Festival. This summer will be the production’s first tour to Canada, where it will also be performed July 5-6 at the Jane Austen Festival in Port Alberni in commemoration of the 200th anniversary of the publication of Persuasion. The widely acclaimed stage production features songs from Jane Austen’s manuscripts and music of the era, chamber orchestra with Celtic and period instruments, beautiful Regency costumes, projected scenery, and world-champion Irish dancers!

“No ‘persuasion’ needed to see this treat for the eyes and ears ... astounding!” (Isle of Wight Press)

“Perfect synchronicity between the cast and the impressive chamber orchestra…retaining much original dialogue which is complemented superbly by Austen’s favourite music and luxurious costumes.” (**** Broadway Baby, Edinburgh Festival Fringe)

“Flashes of humour, great dancing, a small but perfect orchestra, clever scene changes with very well done projections, and the cast of over 30 all playing their roles to perfection … one of the best evening’s entertainment I’ve had” (Bury Free Press)

Further information can be found at http://www.chamberoperatours.org