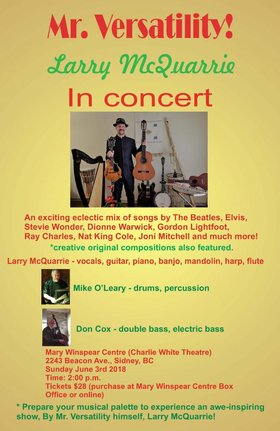 Larry is an award winning guitarist and poet. He has been featured on CBC radio and TV, Breakfast Television (Toronto),
People's Church (Toronto) and other TV and radio shows. He is also a songwriter/composer. Larry studied Jazz with
legendary Jazz guitarist Lenny Breau, when only 16 yrs. old! He has also studied Classical guitar with a number of well
known Classical guitarists and is also a music festival adjudicator. DON'T MISS THIS AMAZING CONCERT Larry and
and band have prepared for you !!

other sites:
I have been a pro musician for over 40 yrs. Studied Jazz guitar with Lenny Breau and Classical guitar with various notable teachers. Have performed on TV, radio, concerts, lounges, dining rooms, weddings, studio work etc. A music teacher as well, teaching guitar, banjo, mandolin, bass and ukulele. I have many influences including Lenny Breau, B... more info

I am a versatile drummer with over 25 years experience. I have studied with Glenn D. Price, Jim Blackley, and Kevin Crabb as well as attending Humber College. I enjoy providing accompaniment for a strong vocalist who wants a tasteful and solid drummer. I have chops but prefer to play as part of a rhythm section. My influences include Paul Simon,... more info
Submit info on this show to our admins