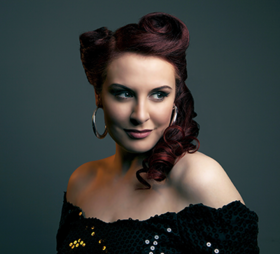 Music: Jazz / Blues
Tia Brazda's sassy jazz-pop gems and vintage style have established her as a sparkling presence on the jazz scene at home and abroad, paying homage to the golden era while adding a modern twist. Having honed her cutting-edge sound in the clubs of Toronto, she burst onto the scene in 2012, hitting #1 on the iTunes Canada Jazz Chart as well as receiving play on BBC Radio 6, CBC Radio, Jazz FM 91.1 in Toronto and college radio stations across Canada. This debut brought her to Paris and Amsterdam as well as cities around the UK in support, in addition to performing at major festivals at home across Canada.

In 2017 Tia performed at the Montreux Jazz Festival, as well as the San Jose Summer Jazz Fest (rated "Best of the Fest") as part of her European and North American touring. She is currently working on a new album scheduled for release in the spring of 2018, featuring an all-star cast of players including Larnell Lewis of Snarky Puppy on drums, Marc Rogers on Bass, Mark Pellizzer of Magic! on piano and Juno-nominated William Sperandei on trumpet.