There'll be a lot of jazz around town during the Vancouver International Jazz Fe...

There'll be a lot of jazz around town during the Vancouver International Jazz Festival but where else are you gonna find a three-set show with a 17-piece big band! Kick back with the South Van Big Band at the Fairview Pub Vancouver, performing a mix of swing, latin and !unk! We're looking forward to performing some modern big band vocals with special guest Vancouver pop & jazz vocalist Ikuko and some original big band compositions and arrangements by special guest saxophonist, composer and educator Dr. Greg Johnson from California!

Bob Mintzer describes Greg Johnson as being, “one of the most gifted saxophonists/composers to come along in quite a while”. Combining elements of Jazz, Classical, Pop, and World; Greg’s music has been performed across the globe. He has played at major music festivals like: Bonnaroo, Lollapalooza and Firefly with the likes of Saint Motel, Robin Thicke, and Barry Manilow and has recorded and performed with Jazz legends Curtis Fuller, Dick Oatts, Peter Erskine, Bob Mintzer and many more. Most recently Greg was featured on the 2017 GRAMMY ballot for “Best Improvised Jazz Solo” for his work on Aaron Serfaty’s “In the Game.” Greg has recently moved up from LA and now resides just north of San Francisco where he works as the Director of Jazz Studies at the Marin School of the Arts.

Jazz vocalist and storyteller IKUKO shares sultry songs that sparkle with grace, playfulness and sizzling energy. Sensual and deep in her approach to interpreting everything from confessional love songs to upbeat standards and new classics, her improvisational skills and technical proficiency as a singer shine through during spellbinding live performances. An uninhibited performer as well as a skilled arranger, lyricist and collaborator, IKUKO readily shares her authentic self with audiences, easily stepping into the lives of the different characters in each tune and confessing their innermost secrets. Her sophisticated, shimmering contralto voice radiates her profound musical intelligence and passion for a contemporary music, calling upon the bold vocalists and tale-spinners who have inspired her, including Ella Fitzgerald, Nancy Wilson and Billie Holiday.

IKUKO spent her early childhood in Japan and first discovered joy in the spotlight as a young girl by putting on impromptu concerts with neighborhood children, traveling to other worlds by singing a wide range of international songs. She began studying electric organ at four and soon gravitated towards emotion-packed jazz standards and vivid American pop songs. She moved to the U.S. to attend high school as an exchange student and became an integral part of her choir. Shortly thereafter, her drive to interpret modern music was solidified after winning top prize in a regional pop music competition.

She relocated to Vancouver and officially began her professional singing career in 2000. Since then, she has enjoyed a busy schedule performing at popular Vancouver venues, from clubs and theaters, to restaurants and event spaces all the while fine-tuning her interpretive jazz skills by working with noted local jazz pianists, vocalists and other instrumentalists. Through her hard work, she has built an extensive repertoire that includes songs in English, Portuguese, Spanish and more. Early in her career, IKUKO opened for the legendary Ray Brown Trio and she has frequently performed with groups in Nagoya, Japan as well as the Vancouver-based trio Ensemble Bouquet, which combined artists from both classical and jazz backgrounds. She was recently asked to write Japanese lyrics for songs by a Canadian composer and also currently performs with a nine-piece R&B group.

Now firmly planted in Vancouver, IKUKO has been celebrated for her adventurous spirit and powerful voice and has sparkled as a solo artist and as an integral member of the numerous groups with which she has collaborated. She is currently embarking on a new adventure as a member of the vibrant 17-piece ensemble South Van Big Band and working on arranging and recording her debut collection of solo music, which will release in Summer 2018. 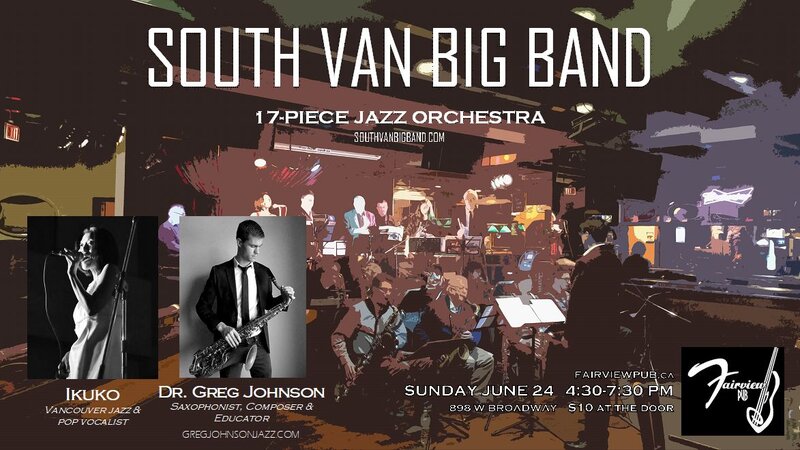