$25 Advance/$30 Door
Physical tickets at: Tickets can be purchased online at www.caravanbc.com (direct link is: http://caravanbc.com/2018/05/f

“Intense, passionate, emotional.” – The London Free Press
Direct from Spain – Fin de Fiesta Flamenco dance and music ensemble presents SALVAJE, an untamed new production that explores the wild, unrestrained side of one of the world’s most passionate and intense art forms: flamenco. SALVAJE, means “wild,” and pays homage to flamenco’s rough-and-tumble origins.
The searing vocals of Alejandro Mendia (Noces Gitanes, France) are accompanied by the intricate guitar arpeggios of Dennis Duffin (Ventanas, Canada) and the haunting flute melodies of Lara Wong (Vancouver/Madrid). Dancer Lia Grainger (2017 Certamen New York International Flamenco Competition finalist) brings the stage to life with fierce and sensual choreographies and improvisations and Hanser Gomez (Cuba) holds down the rhythm on cajon. Deborah “La Caramelita” (Noces Gitanes, France) will also join the ensemble as a special guest dancer for this tour only.
Since their founding in 2013, Fin de Fiesta Flamenco has played more than 90 concerts on two continents. They released their first self-titled album in the fall of 2016 and toured across Canada and France to rave reviews in 2017. This summer, they’ll bring SALVAJE to cities and towns in British Columbia, Alberta, Manitoba, Ontario and Quebec.
To the south of Spain and back again, Fin de Fiesta will leave you breathless, with the pulsing rhythms of flamenco beating in your heart.
ABOUT FIN DE FIESTA FLAMENCO ENSEMBLE - http://www.findefiesta.com
“An absolutely breathtaking performance.” — The Whole Note
Fin de Fiesta Flamenco is a vibrant music and dance ensemble comprised of award winning artists from Canada, France and Cuba, with strong connections with Vancouver. Their performances takes audiences on a thrilling journey, from flamenco’s traditional roots in the music and culture of southern Spain, all the way to its contemporary forms. Ancient rhythms meet avantgarde ideas and converge in an explosion of staccato guitar and percussive footwork. The group includes lead dancer Lia Grainger (Vancouver/Spain), dancer Deborah Dawson (Vancouver, France), Guitarist Dennis Duffin (Toronto/Spain), flautist/singer Lara Wong (Vancouver/Spain), Singer Alejandro Mendia (France/Spain) and percussionist Hanser Gomez (Cuba/Montreal)
Physical tickets at: Tickets can be purchased online at www.caravanbc.com (direct link is: http://caravanbc.com/2018/05/f 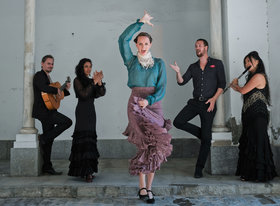