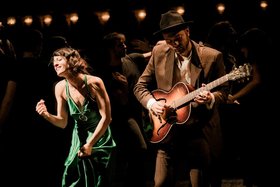 Music: Folk / Celtic / Latin / World, Jazz / Blues
While the duo of Ilaria Graziano & Francesco Forni are from Naples, Italy, their music is a very cosmopolitan mix of folk, blues, and la dolce vita, reflecting a musical world view that is broad and open. Each had individually successful careers of their own, composing, recording, performing and touring – but found inspiration and compatibilità working as a duo, recording three albums together to date, with their most recent release this past March, “Twinkle, Twinkle.”
Singing in their native Italian, along with English, French and Spanish, their performances are fascinating travelogues that take listeners across Mexico and Texas, into the American heartland of blues and folk, and beyond into Argentinean Tango, Central European cabaret, and Neapolitan song. The duo also travels through time, with references to tradition living alongside contemporary styles, while maintaining a magical balance between a lightness of musical textures and expressive depth. The result is a continuous game and role exchange between the soft, warm and fascinating sound of Francesco’s guitar who sometimes seems to be close to catching fire and the evocative voice of Ilaria which could as well be coming from another time and space, hypnotic, sensual and fiery. Their performance is an experience that can hardly be forgotten and, on the contrary, holds on one’s heart and mind for a long time.
ARTIST LINKS:
http://www.musicastrada.it/en/booking-en/ilaria-graziano-francesco-forni-en/
http://www.ilariagrazianofrancescoforni.com/