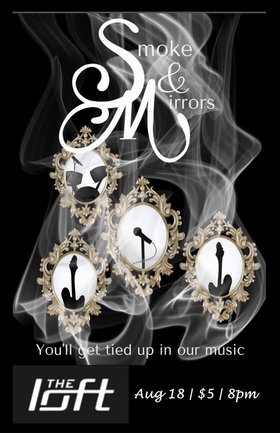 Smoke & Mirrors is a Victoria, BC based cover band performing a wide variety of current popular songs and well known classics from as far back as the 1960s. The Band’s calling – whether performing at a local bar or club, special events, or private parties – is to provide music that is fun, energetic and very danceable with a tight, polished and professional sound.

Smoke & Mirrors is a five piece band composed of very experienced and talented musicians who share a great love of music and performing. Members are:

Jenny Dakai – Lead Vocals: Jenny has been singing since she was a child with her dad belting out Elvis & Johnny Cash. Years of piano lessons, school choirs and local adult choirs gave her the skills to become a great singer. Her love of performing started with Karaoke around town and led to opportunities in three locals bands. She would like to thank Glyn Davies for giving her the confidence and opportunity to take Smoke & Mirrors to this next level and bring his joy of music to the public.

Earl Gray – Guitar and Vocals: Earl comes from a musical family background. He has been playing for many years in a professional capacity and loves the project called Smoke & Mirrors and the musicians he has the pleasure of playing with in this rockin’ band. His influences are varied but mostly in the rock blues Latin genre. Earl has played from East coast to West in Canada and the USA.

Brad Blanchard – Guitar and Vocals: "The New Guy," Brad has been playing guitar for 29 years now. Brad grew up in Southern Ontario and 3 months after starting guitar he had his first appearance on stage and has been entertaining ever since. He has played in a number of bands both in Ontario and British Columbia. Flashy guitar solos have never been Brad's thing, that's what Earl is for. Brad finds more enjoyment in playing solid rhythm and singing harmonies. Influences include: Led Zeppelin, Rolling Stones, Tom Petty, Queen, Neil Young.

Gerry Donovan – Drums: Gerry has been drumming for over 40 years playing with some greats such as Jeff Healey and Derek Sharp (The Guess Who/Sass Jordan). He spent 11 of his teenage years playing in Drum & Bugle Corps in and around southern Ontario and the states before attending Humber College in Toronto majoring in Music Education. His drumming styles derive from listening and playing to almost anything and everything. He excels at jazz, blues, rock, country, R&B and popular music. His influences have been Phil Collins, John Bonham, Steve Gadd, Steve Smith, Dave Weckl and Keith Carlock. Among his teachers has been Paul Delong (Kim Mitchell/ Roger Hodgeson), Roger Flock (Hamilton Philharmonic) and Ricki Gratton (Rough Trade, "Rick's Licks"). He really feels the groove, and along with his bass-playing counterpart, drives the energy behind the band.

Grant Hollett – Bass: Grant has been playing bass for over 25 years with a wide range of bands and musicians. His love of a variety of musical styles and desire to continuously learn new styles and materials has resulted in stints with jazz, blues, rock, country, Motown and popular music. Grant’s style of playing has been influenced by many of the world’s best bass players, including: Paul McCartney, Pino Paladino, Leland Sklar, James Jamerson, Charlie Hayden and Alain Caron to name a few. Feel and groove are the most important elements of bass for Grant as he loves to drive the energy of a song in tight partnership with the drummer