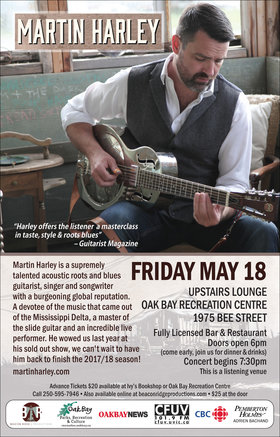 Music: Jazz / Blues
Martin Harley is a supremely talented acoustic roots and blues guitarist, singer and songwriter with a burgeoning global reputation. He’s a devotee to the music that came out of the Mississippi Delta, the slide guitar, and many other forms of roots music. Though Harley’s sound is rooted in the blues it seeks to tell his own story and draws on the ruminations of a musician who has spent much of his life on the road.

The new studio album ‘Static In The Wires’ was released in 2017, it was produced by Martin & Daniel Kimbro and recorded in Nashville. It follows the critically acclaimed ‘Live At Southern Ground. A ‘Spellbinding 50 minutes’ as The Observer put it. It is Martin’s 7th album to date, which also includes 14 time Grammy winner Jerry Douglas (Ray Charles, Eric Clapton, Dolly Parton), Derek Mixon (Chris Stapleton, Sam Lewis) and Micah Hulsher (Alabama Shakes).

Martin has headlined Music City Roots in Nashville, performed on the Cayamo Cruise with Chris Stapleton, toured coast to coast with ZZ Ward, Delta Rae and opened for Iron & Wine, Bruce Hornsby, Five for Fighting, World Party, Beth Hart, Joe Bonamassa amongst many others. His music has features on hit TV shows such as the Vampire Diaries, Banshee, America best Bars and VH1’s Morning Buzz. He's played major folk and blues festivals in North America, Europe and the Caribbean. .
Martin wowed audiences at his first ever sold out Victoria performance last year and we’re really looking forward to his return! Tickets are selling fast, so better not wait until the last minute.

You check him out here: http://www.martinharley.com

Advance tickets $20 at Ivy's Bookshop and Oak Bay Recreation Centre reception. They are $25 at the door

The Upstairs Lounge is a licensed restaurant, doors open at 6 pm for dinner service, the concert starts at 7:30 pm. Please note this is a listening venue.