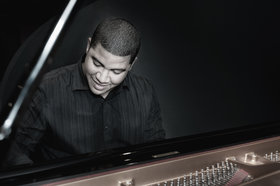 Music: Jazz / Blues
The West Coast Cuban All Stars
The West Coast Cuban All Stars was formed in 2011 by the internationally renowned Cuban Pianist and Composer Pablo Cardenas, putting together an all stars line up of Musicians from the Latin scene of Victoria and BC. This project has the purpose of keeping alive the Latin and Afro-Cuban music roots with a fresh sound and high energy, but also mixing Latin Jazz music with other musical tendencies like Jazz Fusion and world music. These highly experienced musicians are prepared to deliver with an outstanding quality at any type of event, such as dancing events, Jazz festivals or theater concerts. Since their great debut in 2011 at the Victoria Event Center, The West Coast Cuban All Stars has been performing all around the best venues and festivals in the west coast of Canada. In the all stars line up for this upcoming show, the masters of Cuban percussion Hector Ramos and Leon Torres, the amazing Peter Dowse on the bass and special guests of the night Rafael Duvergel on vocals, and Kelby MacNayr on the drums.


Pablo Cardenas
Pablo Luis Cardenas is one of the best Cuban pianists of his generation, his versatility and high technical preparation make his music very rich and full of different influences from Afro-Cuban, Latin jazz, to Fusion, Modern Jazz, Classical and more. He studied classical and Jazz at the Superior institute of arts of Havana, Cuba. In 2005 he created in Havana the Pablo Cardenas Latin Jazz Quartet and has performed in different important festivals in Cuba such as the Havana International Jazz Plaza Festival, Havana International Contemporary Music Festival and many more. Since arriving in Canada in 2011, he created The West Coast Cuban All Stars, performing at many different venues and festivals as CBC, Vancouver International Jazz Festival, Vancouver Cuban Music Festival, Roots and Blues Festivals and many more. Pablo Cardenas has collaborated with world class musicians as Ana Velinova, Adonis Puentes, Phil Dwyer and many more. He is currently involve in the preparation of an album and other collaborations.
Peter Dowse
Peter Dowse was born in the UK before moving to North America in pursuit of a career in music. Peter spent a significant part of his working life in New York City and did a lot of his studio recordings in Rhythm & Blues and jazz working with great artists such as Omar Hakim. Peter went on to work as a record producer and performer and even shared the stage with Smokey Robinson and The Four Tops. Peter then re-located Montreal, Quebec and more recently to Victoria. His great versatility allows him to be able to work with many different projects including the Cuban music events.

Hector Ramos
Hector Ramos is a master conga player from Cienfuegos, Cuba who graduated from the National Academy of Music in Havana. He moved to Canada five years ago and now makes his home in Victoria. Hector has played professionally in Cuba for over 10 years exploring all styles of Latin Jazz and Afro-Cuban Folklore through different groups. Hector now plays with Pablo Cardenas and Adonis Puentes Band, and has collaborated with many others like the legendary Ganga Giri from Australia on his 2012 tour.

Leon Torres
Leon Torres is a Cuban percussionist and composer, after playing with important bands in Cuba he joined a group of talented Cuban musicians in the 2000 called The Puentes Brothers, with whom he recorded the amazing CD Murumba cubana and toured thru all Canada and the States, years after he became an independent musician and has been teaching and doing recording sessions, also collaborating with many musicians like Sean Drabbit, Brent Jarvis and many more.


Rafael Duvergel (special guest)
Rafael Duvergel is a master of rumba and a show man, originally from Baracoa, Guantanamo,Cuba. After many years of experience as a musician in Cuba, he formed the Rumba group Bararumba and made a North America tour in 2003. Since Victoria became his home of residency, he has been collaborating with Pablo Cardenas engaging the audience every time with his high energy and amazing charisma on stage. Rafael will be singing and dancing on one of the special moments of the night with The West Coast Cuban all Stars.


Kelby MacNayr (special guest)
Kelby MacNayr is one of the most impressive jazz drummers in North America, also a composer and arranger. He is specially known for his musical versatility and is involved with the most interesting music projects happening in Victoria. He also performs nationally and internationally, just a few of the jazz icons he has played with include Hugh Fraser and Phil Dwyer. Kelby began working with Pablo in 2012 and has since joined him on many important events and festivals. His knowledge and appreciation for Latin rhythms got him to often be part of many Cuban music events in Victoria. He will be one of Pablo's Special guests at the next West Coast Cuban All Stars show.