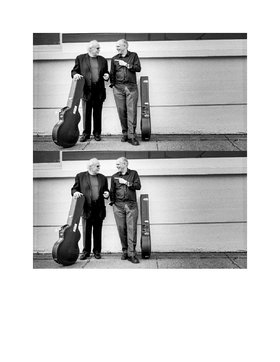 Music: Jazz / Blues
Interplay and communication is what Oliver Gannon and Bill Coon are all about as they play off each other and have a great time doing it!

The band’s critically acclaimed debut CD Two Much Guitar showcases the sparks that fly between these two guitarists and the conversational quality and intimacy the duo achieves in a live setting. Recently Two Much More! (Cellar Live June 2015) has received even more favourable reviews as the band just keeps evolving.

While the group showcases the two virtuoso guitarists, acoustic bassist Darren Radtke and drummer Dave Robbins round out the quartet and add their own incredible supportive and soloing talents to the powerful combination of talent.

A mixture of classic standards and originals from Coon and Gannon are performed with verve, wit and spontaneity. Although you will hear influences Wes Montgomery, Jim Hall, and Grant Green, this band has a sound all its own.

BIO
Juno nominated artist Bill Coon is one of Canada’s most highly respected musicians and is winner of the 2009 National Jazz Awards, ‘Guitarist of the Year’.

Among Bill’s more than fifty recordings are Scudder’s Groove featuring Juno award winners Ross Taggart and Dave Robbins, and With Benefits with Cory Weeds, Lewis Nash and Peter Washington. A recording with award-winning guitarist Oliver Gannon: Two Much More! was acclaimed as one of the top ten Canadian jazz recordings of 2015 by the CBC, as was Jill Townsend Big Band’s Legacy, The Music of Ross Taggart, a tribute to the great Ross Taggart that features Bill’s playing and large ensemble writing. Bill’s most recent collaborations are with LA-based singer-songwriter Kristina Olsen, Sweet Stillness and Arrival a trio recording with vocalist Jennifer Scott and bassist Rene Worst. His newest recording as a leader is Departure (Cellar Live) by the BC Double Quartet featuring Brad Turner and Cameron Wilson and has received funding from The Canada Council for the Arts.

He has won awards and commissions from the BC Arts Council, the Socan Foundation, and has received several Canada Council Arts Awards enabling him to study with Jim Hall, Dr. Louis Stewart, Neil Chotem and Rick Wilkins.

Bill is an adjudicator and clinician at music festivals and workshops throughout Canada, including the VSO School of Music Summer Jazz Workshop and the BC Swing Workshop in Sorrento, BC. He is on faculty at Capilano University in North Vancouver, teaching arranging, composition, jazz history, small and large ensembles, and jazz guitar.


Jazz guitarist, Oliver Gannon, has been very active in the Vancouver and Canadian jazz scenes since the early 1970's. In 2003, Oliver was elected ‘Jazz Guitarist of the Year’ by the Canadian Jazz Awards. He has performed at many of the major jazz festivals in Europe and North America and has made three concert tours of the former USSR. He has performed on many jazz records, including four on the Concord label. A duo album recorded in 1982 with long standing colleague, tenor saxophonist Fraser MacPherson, won the Juno Award (the Canadian Grammy) for best jazz album.
He currently performs with the following groups: The Oliver Gannon Quartet (with Miles Black, Miles Hill and Blaine Wikjord). The Oliver Gannon/Patty Hervey Quartet (with Al Wold and John Nolan), The Ian McDougall Sextet and the Oliver Gannon and Bill Coon Qt.