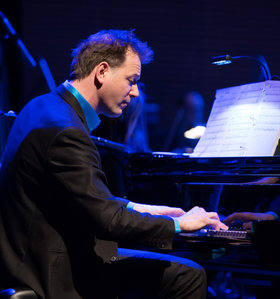 This group has played together for many years under the leadership of Attila Fias, a
Hungarian-born, Toronto-raised platinum selling producer, composer and pianist with a passion for
blending world music with jazz, such as Hungarian, Brazilian, Indian and Latin influences. In his
music and compositions, he distills these into his own flavour, his jazz background binding it all
together.

The Attila Fias group’s performances include the 61st Primetime Emmy Award Governor’s Ball in Los
Angeles, a recent concert in Ottawa as part of the Canada 150 celebrations in collaboration with
the Embassy of Hungary, and numerous jazz festivals.

Attila has produced, composed, arranged, and performed for Universal/MCA, Sony/ BMG, EMI America,
Somerset Entertainment, Fisher Price and independent labels, on over 100 internationally
distributed CDs, including multiple gold and platinum-selling albums in Canada and the US.

He has also recorded three full albums of his original material. His latest album called “Ride” was
released in October 2016 and continues to receive regular airplay on Jazz- FM and CBC radio among
others.

"Attila's new recording Ride is an explosion of incredible playing married to great compositions.
The influences are many, but the sound is uniquely his own. His music has been sounding great on
JAZZ-FM91"
- Brad Barker - Musical Director/On-Air Host, Jazz-FM91, Toronto

"I think it's a masterpiece on every level. Your compositions are great, the playing (by everyone)
is sensational and the sound is beautiful. Your own playing always knocks me out."
- Don Thompson - Jazz Legend

Richard Brisco is a passionate & versatile drummer based in Toronto, Canada. Since graduating with
a Bachelor of Music in Jazz Performance from the University of Toronto, his studies have taken him
to Brazil, Cuba and Venezuela.


Brisco has performed internationally on seven continents and at major international jazz festivals.
As a member of the Toronto Samba-Jazz Connection, he has been
performing with harmonica virtuoso, Hendrik Meurkens since 2006. Brisco has been performing with
jazz legend Barry Harris and the "We Are One Project" since
2012. As a member of the Attila Fias Quartet he was invited to perform at the Emmy
Awards Governors Ball in Los Angeles.

Sean Drabitt left Victoria 24 years ago to study Jazz bass in Los Angeles with mentor John Clayton.
The next decade he spent first in New Orleans, where he worked with all members of the Marsalis
family, then in New York, working with the best young players

on the modern jazz scene, Kurt Rosenwinkel, Mark Turner, Eric Harland and Ari Honig among them.
Specializing in a hard driving hard bop informed style of bass playing he returned to Victoria
close to 15 years ago. Today he divides his time between various projects on both electric and
acoustic bass. More recent career highlights have included a western Canadian tour with Terrell
Stafford’s quintet and a number of gigs with pianist George Colligan.