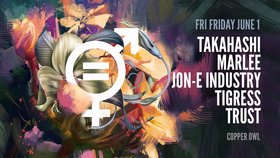 Takahashi has been DJing for over a decade and is one of dance music's coolest sub compact enthusiasts. She has a flare for picking out those tracks that make you "ooo" and "ahhh", and a style that is infectious as it is unabashedly fun! From the curvy basslines of house and garage flavor to jackin electro funk and breaks she's got you covered. No doubt she always has everyone on the dancefloor, feet smiling. Originally hailing from Alberta she has integrated well into Victoria DJ culture playing all the venues that have ever been graced with turntables. There's no need to go to market, this girl is a one stop shop dj tour de force, and she has everything you need right here.

DJ Marlee first stepped to the decks at age 19 and enjoyed a meteoric rise within Canada’s West Coast scene, particularly hometown Victoria BC where she was known for creating romping dance floors through dirty rhythms and big bass. She packed clubs, stood beside legends, and carved herself a loyal following but 15+ years later Marlee is rediscovering her first love and focusing on the music before the scene.

“I haven’t retired,” Marlee says. “But I used to be so full-on and just live and breathe it all the time. Now music is more of a garnish on my life, instead of the full meal deal.”

The step back has allowed her to focus on producing tracks and by only playing when and where she feels excited Marlee is bringing a passion back to her live shows that she believes may have been left on the roadside in the days of rushing from clubs to rave to radio to residency.

“I realized I have all these tracks I started putting together but haven’t finished,” she says. “And I’ve bought and sold and re-bought and re-sold my gear so many times now it’s a bit of a mish-mash, but when I step up to the decks these days the energy feels new.”

That fresh energy is evident in new tracks and also in a new focus to pass her knowledge onto a new generation. Marlee’s beats still slam, her build-ups still melt faces but there is a confidence behind it all that comes with doing things on her own terms.

“It’s fun again,” Marlee says, “and that reminds me of those early days when I first fell in love with electronic music. Except now I realize I don’t need to be here every minute of my life– it’s an incredibly freeing feeling and isn’t that really what this music is supposed to be about? Freedom?”

A 16 year veteran of the dance music industry, Jon-E Industry (aka JFI, aka 1 half of The Afterschool Special) has left a long standing mark on the international House music scene as a DJ, Producer, and Label boss. After his breakthrough release “Take It Low” hit the Beatport Top 100 Electro House Charts, the Canadian hailing from the West Coast of British Columbia started turning out an impressive catalog of original and remix releases on some of the industry’s most prestigious labels, including his own “Nu Industry Recordings”.

When catching a live DJ set, Jon’s well known for his high energy, precision mixing, and ability to change up the vibe in the room on a dime. No dance floor is safe when it’s his turn to take the stage.

Serving up sassy house and booty bass music, this TigRess is ready to ROAR. As a founding member of the PLUR Collective, TigRess is passionate about creating spaces where people can fully express themselves and unleash their wild side. Since 2016, she has hosted and curated the lineup of the collective’s
signature underwear-themed event, Pants Off Dance Off - a fundraiser for HIV/HCV positive youth.

As a DJ, TigRess is always on the prowl for the freshest sound, and pours her heart and soul into curating unique and dynamic sets. With an infectious energy and stage presence, TigRess always leaves the crowd hungry for more. Now starting her next adventure into production, TigRess released her first single
Shake Dat on April 7th, 2018. Stay tuned, as TigRess is sinking her claws deep into the studio to bring you an array of fierce and sassy tracks.

Trust remains a mystery, an experience you have to witness yourself. No recordings exist online...yet.

Trust is Robert Alfons and Maya Postepski (of AUSTRA). Formed in 2009, the Toronto-based duo released its first singles, "Candy Walls" and "Bulbform," on Brooklyn-based Sacred Bones Records in 2011 before signing with Arts & Crafts for the 2012 release of TRST. Tales of lust, wax, and erotomania carry along on a dense black vapor of speed, space ... more info
Submit info on this show to our admins