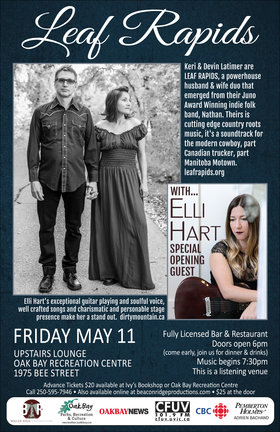 Named for a small Manitoba town, Leaf Rapids is primarily a reflection of landscape – miles and miles of grass or snow in any direction, and the northern lights dancing above. Their sound resembles the Canadian grasslands, as beautiful as they are harsh, taking notes from Canada’s soft tones and tough seasons. From Keri Latimer’s sweet, Dolly Parton-esque vocal styling, to Devin Latimer’s slow-and-steady bass lines, their music is a blend of Canadian country, roots and Americana with a sound that drives home the band's refreshing sonic diversity. http://www.leafrapids.org

Advance tickets $20 at Ivy's Bookshop and the Oak Bay Recreation Centre Reception. They are $25 at the door

Please note The Upstairs Lounge is a licensed restaurant and bar, doors open at 6 pm for dinner service, the concert starts at 7:30 pm