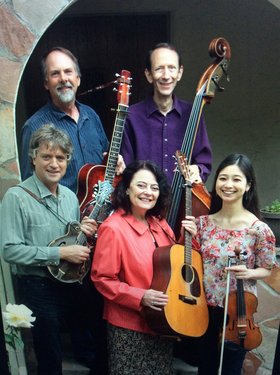 Kathy has won a Grammy and two IBMA Awards for her part on True Life Blues: The Songs Of Bill Monroe, and received a Lifetime Membership from the California Bluegrass Association. She co-founded the internationally-acclaimed Good Ol' Persons, and performed and recorded with the Frank Wakefield Band, Laurie Lewis, and John Reischman. Kathy appeared on three high-profile Rounder collections of bluegrass songs by women, and has toured throughout North America, Europe and Japan.

Led by one of the music's extraordinary composers and vocalists, the Kathy Kallick Band has nearly as much fun as the audience when performing. The material is compelling, the tone ranges from humorous to bittersweet to soulful, the instrumental playing is electric, the vocals luminous, the presentation inclusive. As was once said about another California band: They're not just the best at what they do; they're the only ones who do what they do.

"This is a top-notch band led by a woman with the warmest, richest voice in our music today."
- Katy Daley, WAMU's Bluegrass Country