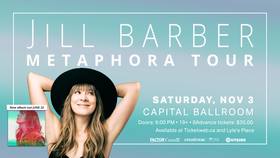 Music: Jazz / Blues, Pop / Rock / Indie
** There will only be 225 tickets released for this show with general admission seating provided **

Jill Barber has become renowned for writing songs that evoke feelings of a bygone era. The songs on Fool’s Gold are delivered by that distinct, evocative voice of an artist who has drawn inspiration from a cross section of musical genres. Regardless of Jill’s influences, the one thing you are always assured of is that you know a Jill Barber song when you hear it, and chances are, you’ll never forget it…

2 time Juno Award nominee Jill Barber, is one of Canada’s brightest stars – selling out theatres coast to coast and headlining the country’s most prestigious festivals. Her albums have sold over 100,000 copies and her album Mischievous Moon spent 13 straight weeks at #1 on the Canadian Jazz Charts and debuted at #12 on the US Billboard Jazz charts. Her song “Chances” was also featured on the soundtrack for the hit series “Orange is the New Black.” She has fans in Josh Ritter, Kathleen Edwards, Kris Kristofferson (who hails Jill as a “real songwriter, a damn good songwriter”) and collaborator Ron Sexsmith.

Having earned over twenty award nominations and with two top-selling albums in English, in 2013 Jill released the french language album “Chansons,” after a celebrated performance at the prestigious Montreal Jazz Festival where she sang (for the first time ever) a French translation of one of her songs, “Tous Mes Rêves” (“All My Dreams”). Chansons has firmly established Jill as an artist to watch in both French and English, and an upcoming 2015 European tour is sure to expand her fan base even more.

Drawing on influences from old-time jazz standards, bluegrassy-folk and hook-laden pop, Jill Barber has the subtle assuredness of a songwriter with “dead-on phrasing, an impressive range and a knack for squeezing genuine emotion out of a cozy alto purr” says Toronto’s NOW. In 2002, Barber moved to Halifax, Nova Scotia from her native Ontar... more info

This guitar slinging aficionado has the street smarts of an urban swinger and the heart-bending soul of a gospel preacher, and is adept at blending a dark, bluesy Americana vibe with warm, acoustic soul where bits of old folk music and flamenco tunes swirl in and out of earshot. more info
Submit info on this show to our admins