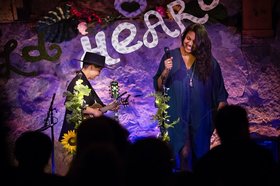 DESIRÉE DAWSON
Desirée Dawson is well known as the love spreading human who won the CBC Searchlight Competition in May 2016.

Desirée resides in Vancouver, which is the unceded, ancestral, and occupied, traditional lands of the Coast Salish peoples. Desirée's single "Hide" Won her the title of CBC searchlight winner and is her first single on iTunes, Spotify, to play on CBC radio and to get 1mm streams on Spotify. Her second released single, and title track to her album, Wild Heart, spent many weeks on the CBC top 20 and was remixed by over 2000 producers from all corners of the globe.

Her latest single, Where Do We Go, is her 3rd song to be broadcasted across Canada on CBC radio. Desirée's debut album, Wild Heart, came out February 2017. Wild Heart has been added to many prominent playlists on Spotify, Apple Music, Stingray music, and many more stations. Desirée has graced the stages of many renowned venues such as the Vogue theatre and the Commodore Ballroom on Vancouver, The Legendary Horseshoe Tavern in Toronto, CBC Music festival, Surrey Fusion Festival and many more.

Desirée is currently working on a new album set to be released Fall 2018. Desirée makes a point of having every song be honest and emotionally charged. She is very passionate about healing as a collective, using the power of melodies, lyrics and instrumentation to impact listeners. Through this, her music has managed to travel the world over.

JODY OKABE
Jody Okabe is a queer, Tsimshian, Japanese, and French Canadian artist and musician born and raised in Northern BC. She discovered her voice in her late 20's through organizing community open mic nights with friends in Merritt BC. Ever since then she keeps singing because she believes in the power of music to heal, and to connect us to this earth, our hearts, and to each other. She currently resides in Vancouver, the unceded, ancestral, and occupied, traditional lands of the xʷməθkʷəy̓əm (Musqueam), Səl̓ílwətaʔ (Tsleil-Watuth), Stó:lō, Shíshálh (Sechelt) and Skwxwú7mesh (Squamish) Nations of the Coast Salish peoples.