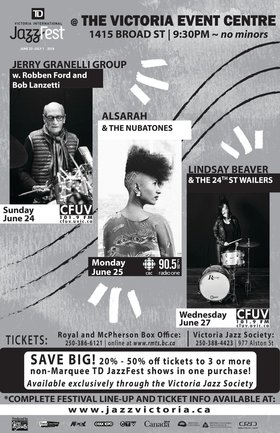 Experienced, road-tested and tougher than a two by four, The 24th Street Wailers, now based in Austin, Texas, take vintage rock and roll, 60’s R&B and rockabilly, then kick it up a notch. Their hard-swinging shows earned them two consecutive Maple Blues Award nominations for “Best Entertainer of the Year” in 2013 and 2014. Their latest album Where Evil Grows was also nominated for the 2015 JUNO for “Best Blues Album of the Year”. The 24th Street Wailers are now led by Lindsay Beaver, a flame-haired vocalist, drummer, and songwriter who was nominated for the 2014 Maple Blues Award for “Drummer of the Year.” She is joined by Brad Stivers guitar/vocals and Josh Williams bass.