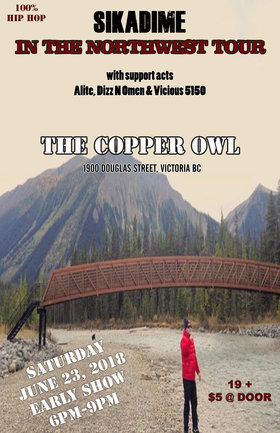 Originally from Victoria, Vancouver award winning hip hop artist & producer Sikadime embarks on his latest tour in support of the new album "The Wooden Spiral Staircase in a Glass House" making a stop at The Copper Owl for an early show.
Bringing along on this journey is Vicious 5150 of Hazmat Crew, Alite & Dizz N' Omen of Natural Talent.

Sikadime:
Best known for his collaborations with artists such as B-Real of Cypress Hill, Mellow Man Ace, Moka Only, D-Sisive, Dan-e-o, CookBook of LA Symphony, Sikadime rose to prominence in the early 2000's as frontman for the Niagara hip hop group Tha Pacolyps eventually signing to Death Row Records. Sikadime broke out as a solo act in 2004 and has been unstoppable with over 44 albums & numerous tours. With performing almost 20 years, Sika shows no signs of slowing down and brings a mass amount of energy on stage.
https://www.sikadime.net/
https://www.facebook.com/SikadimeMusic
https://www.youtube.com/Sikadime

Vicious 5150:
Vicious 5150, also known as Mr. Siso is a an experimental hip hop artist from Port Coquitlam, Vicious Columbia, Canada. As a member of Hazmat Music, he has performed several shows across BC, including opening for Bone Thugs N Harmony, RA The Rugged Man, Apathy & Celph Titled and many more. Celebrating his recent release earlier this year of "The One Who Two'd The Three", the music video for "Get Through The Day" has already spawn over 12,000 views. With fast delivery and g-funk beats, Vicious give that mixture the hip hop world has been missing for some time with energtic stage presence.
http://www.vicious5150.bandcamp.com/
http://www.facebook.com/TheVicious5150
http://www.youtube.com/TheVicious5150

Alite:
Former member of OPC, Alite has established himself as a solo artist and fierce freestyler over recent years with strong lyrical appeal and positive messages. With his newest album "Vanguard", Alite takes you on a musical trip through Vancouver streets while addressing social issues & solutions as evident on the song "Why Bother". Check for Alite on the song "In The Northwest" from Sikadime's album The Wooden Spiral Staircase in a Glass House.
https://www.reverbnation.com/AliteMC

Dizz N' Omen
DIzz n Omen met in 2004, bonding over a mutual love of hip hop. Early affiliations were a group of local MCs associated with Natural Talent Entertainment such as Ham-E, DZ Man(R.I.P.) and Trev-One. Hard hitting music, cyphering and discussions into the genre they love developed their early friendship.
In 2008, Omen appeared briefly on a large list of tracks via Haze Entertainment. It was this time working with Haze and Asylum Ave Studios that he would make his first recording efforts. During this period, Dizz was already working with a variety of local artists recording tracks of his own.
The two would then team up and begin recording. Their first project, Haf Kut, a group surrounding themes of partying, good natured lifestyle. Difficulty in Omen's personal life, caused a split until 2011. Reunited and rejuvenated, they hit the studio and started their promotional album "Fresh 'N Twisted" developing and defining their sound. A comedic/concious duo, with a raw edge, diverse and original, they maintain a "what you hear is what you get" policy with no falsehoods.
The release of the "Fresh 'N Twisted" mixtape they garnered a great deal of perspective on their talents. Both take pride in their craft and culture, and continue to grow. In 2014 they released their first full length album, "Filthy Measures, Guilty Pleasures," and are continuing to do shows and share their positive nature with their growing fan base. http://www.reverbnation.com/dizznomen http://www.facebook.com/dizznomen
https://youtu.be/0-A2woYfpj8