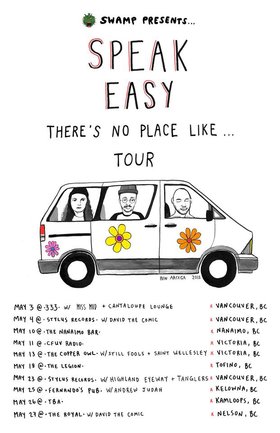 Music: Classical, Funk / R&B, Pop / Rock / Indie
Speak Easy play Copper Owl in Victoria, BC with friends Still Fools and Saint Wellesley, as they kick off their West Coast tour in support of their new EP '(There's No Place Like) 1330'

Speak Easy is a psychedelic pop driven trio originating from the interior of British Columbia. The band the was formed during the winter months of 2016. After an ongoing, jam inspired collaboration of drummer Scott Sparrow and guitarist Oliver Sandberg during their university years in BC, bassist Lauren Giorgio was introduced to the project, and Speak Easy was conceived.

The group combines moody psychedelic rock with an eclectic sound, which has been compared to John Lennon - if he’d never met Yoko Ono. With their love-hate inspired lyrics and dad-pop chord progressions, the band has accumulated a steady fan-base within the Okanagan, playing multiple packed-house shows - including an overflowing debut show at music hub Milkcrate Records in Kelowna.

Speak Easy are setting off on their first ever tour May 2018, heading out along the West Coast of BC in support of their first full-length EP '(There's No Place Like) 1330'.

Bloozy folkin' rock to put spirit in your orifices more info
Audio: Hell's Gate
Submit info on this show to our admins