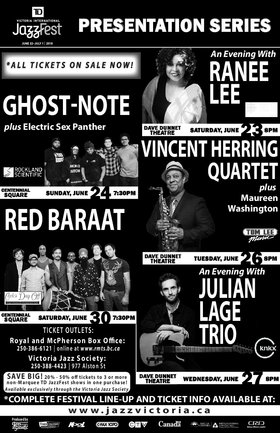 Three time Grammy nominee Julian Lage is a certified guitar prodigy who has a distinctly American musical personality that he expresses via a unique blend of jazz, blues, classical, and country. The virtuoso, who played with Gary Burton at age 15, has matured into a thoughtful performer and composer who combines fleet precision and immense technical skill with a boundless musical imagination. His current trio has just released its second CD Modern Lore with Mack Avenue, which was praised by Downbeat for its “virtuosic swirl of twangy textures and gritty grooves.” His 2017 recording, Mount Royal, was nominated for a Grammy this year. Not unlike the equally eclectic Bill Frisell, Lage and his trio take an Americana-tinged ramble through some gorgeous tunes that evoke Duane Eddy and Chet Atkins alongside some righteous swing, languidly cool jazz, and spirited improvisation. Jorge Roeder bass, Eric Doob drums