Experimental duo Southwoods return to the Pretty Good Not Bad roster with their ...

Experimental duo Southwoods return to the Pretty Good Not Bad roster with their swirling feedback and esoteric distortion.

The evening is rounded off with the dark ambience of Victoria's Arctica, Vancouver's Gran Am, and the new project from prolific Declan Huges and Zayn Wiwchar, Vague.
----
SOUTHWOODS (PORTLAND, OR)
https://southwoods.bandcamp.com/releases
----
GRAN AM (VANCOUVER, BC)
https://granam.bandcamp.com/
http://www.amandaanderson.xyz/
gran am is an interdisciplinary artist based in vancouver, bc – unceded territory of the Musqueam, Squamish and Tsleil-Waututh First Nations. She combines aural and visual mediums to create improvised experimental performances that utilize cassette tape loops, distant vocals, heavy drones, and oscillating feedback alongside hazy video collages. Motivated by themes of idealized femininity and normalized oppression, gran am performances draw from the dissonance felt within ~ to be loud in a world that has told her to be quiet.
----
VAGUE (VICTORIA, BC)
Vague will be making their debut at PGNB. However, Declan Hughes and Zayn Wiwchar are no strangers to the Victoria music scene. Zayn has been producing lo-fi hip hop tracks as “Loft” for the past seven years, including an EP released by Sensing Waves titled Plastic Nostalgia. He has set out to create thoughtful and playful soundscapes. Declan has been playing in various bands including Fountain, and he has released an album under his solo project “Dark Glasses”.
Vague is a blend of styles, mixing analog with digital and incorporating found sounds and unique samples. Vague will set out to create an immersive soundscape, set to take the listener down into dark valleys and up into high peaks.
----
ARCTICA (VICTORIA, BC)
https://vrcticv.bandcamp.com/releases
http://instagram.com/vrcticv
https://soundcloud.com/vrcticv
A ghost in an empty hallway. A raven frozen in a black lake.
As cold as winter; An abysmal slumber.
Arctica is the ambient project of singer-songwriter, Alyra. Her creations are
a poetic reflection of sorrows, death, rebirth, and living in harmony with darkness.
----
TOBY GREEN
https://www.instagram.com/tobycgreen/
Toby Green is from the Comox Valley, attending University of Victoria studying in the Visual Arts Department. Originally entering the field of arts through photography with a strong interest in fashion. After a few months of attending the program his primary focus began to transition into sculpture and installation. Graduating in April, Toby is interested in light and ones perception of space. Using projections and sculpture like objects Toby tries to create a space for the viewers mind to wander.
----
FRIDAY, MAY 18TH
DOORS AT 7PM
VINYL ENVY, ALL AGES
$10 AT THE DOOR ONLY

PGNB occurs on unceded Coast Salish Territories*, specifically of the Lekwungen and WSÁNEĆ peoples. As an event that focuses on building artistic and cultural bridges, we acknowledge the rich cultural history of the many peoples and rituals that have been affected by the ongoing process of dispossession and colonialism. We hold this understanding in our interactions and engagements with this land and its people.
*The term Coast Salish is used to encompass a number of Indigenous peoples, including Esquimalt, Hul’qumi’num, Klahoose, Lekwungen (Songhees), MALAXEt, Musqueam, OStlq’emeylem, Pentlatch, Scia’new (Beecher Bay), Sliammon, Shishalh, Skxwú7mesh-ulh Úxwumixw, Stó:lo, Straits, Tsleil-Waututh, T’Sou-ke, SÁNEĆ (Pauquachin, Tsartlip, Tsawout, Tseycum), and Xwemalhkwu. 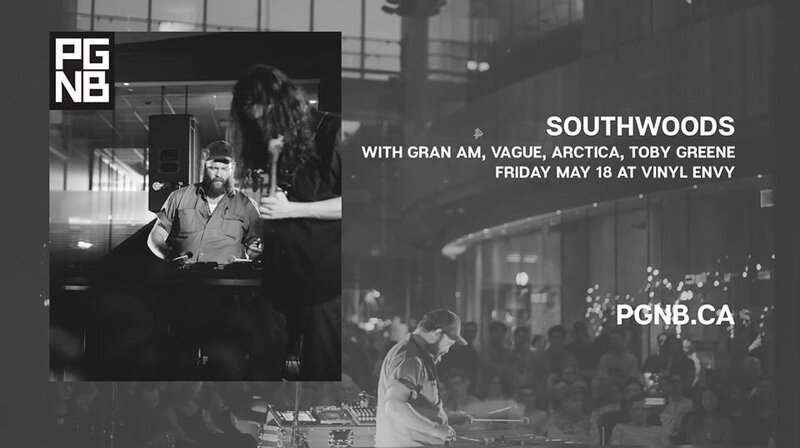