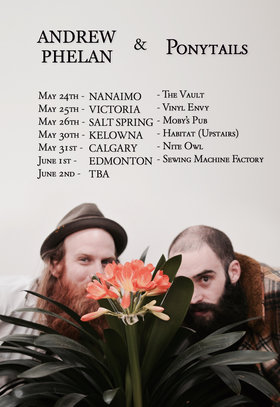 Hailing from Vancouver, Canada, Anthony Shackell is now a Victoria-based musician. A multi-instrumentalist, songwriter, and performer, he can be often be found playing trumpet with MYLA and Phonosonics, in a practice room, or writing his next work. He draws on influences from artists and groups such as Donovan Woods, Hiatus Kaiyote, Greg Holden, Lawrence, and Busty and the Bass, and is always looking to add a new twist to the music that he writes.

Ponytails is a psychedelic pop band from Vancouver BC which came to fruition in March 2016, spawned from best friends Harvey Merrit (vocals, bass) and Travis Goeres (lead guitar) love of pizza and the theme music of Sylvester Stallone movies. Liam Less (bass, rhythm guitar, vocals) and Simon Furminger (drums, vocals) joined in late March and in September 2016 started working on their self titled EP.

Australian born, Vancouver based singer Andrew Phelan writes close to the chest, and this heartfelt approach to songwriting quickly let him cut a path in the Canadian music scene as the charming front man of Vancouver Folk band The River and The Road. Since 2012, the band has toured Canada 6 times over, played multiple high-profile festivals (Squamish Valley Music Festival, Toronto Urban Roots Festival) and opened for acts such as Shakey Graves and Sam Roberts.
The River and The Road were nominated for 2015 best breakthrough album of the year at the Canadian Folk Music Awards for their sophomore release Headlights, released in May.

Since then, Andrew has continued performing solo and with a trio in Australia and Canada. Notable recent performances include supporting Deep Dark Woods, John Paul White (ex Civil Wars), and a 19 sold out show cross Canada tour with Peach Pit.

The 2018 EP titled “Everything Rattles When I Breathe” is scheduled for release this Summer.