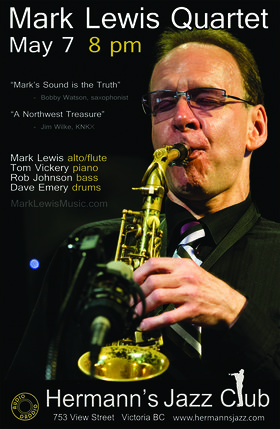 Music: Jazz / Blues
On tour from Seattle, saxophone and flute master Mark Lewis performs throughout the U.S. to sold out shows and standing ovations, and has been active in jazz scenes from Seattle and San Francisco to Rotterdam and Paris. Mark is author of more than 1,700 compositions and plays a mix of engaging originals and popular jazz standards in concert. Mark recently won #2 on alto sax (after Richie Cole) and #3 on flute (after Charles Lloyd and Hubert Laws) for work on his album The New York Session in the 39th Annual Jazz Station Awards out of Los Angeles. The album was recorded in New York City with veteran players George Cables, Victor Lewis and Essiet Essiet. For this concert, he is performing with pianist Tom Vickery (who plays differently with Mark than at any other time), bassist Rob Johnson and drummer Dave Emery.

“You listen to the guys with the primo recording contracts, on the very top labels, and in my opinion they’re not in Mark’s league” – Ted Gioia, author, The History of Jazz and How to Listen to Jazz

“A Northwest treasure” and “a catalyst who makes things happen on the stage” – Jim Wilke, Jazz Northwest on KNKX, Seattle