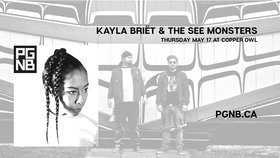 Kayla Briët is a 21 year old multi-instrumentalist, composer, songwriter, filmmaker and virtual reality artist exploring themes of identity in multiple mediums of storytelling. After teaching herself how to create music in her room at a young age, she took up multiple instruments, scores her own films, and draws from elements of electronic, a-cappella, folk, and alternative pop; singing textured tales of love, loss, and all that's in-between. She's now bringing her “room” onto the live stage as a one-woman band, with a loop pedal, keyboard, guitar & guzheng zither, a traditional Chinese instrument. Her Prairie Band Potawatomi/Neshnabe, Chinese, and Dutch-Indonesian roots deeply inspire her in both music, VR, and film. Her award-winning short documentary, Smoke That Travels, immerses viewers in her native Prairie Band Potawatomi heritage and explores fears that her culture may someday be forgotten. This film has screened and won awards at over 45 festivals internationally, including Sundance, MoMA NYC; and is archived in the Smithsonian Institute in Washington DC. Currently, she is creating a room-scale VR collective diary (TROVE), teaching all-ages workshops, scoring independent films, and directing experimental stories in 2D & VR.
----
The See Monsters
http://www.theseemonsters.com/

Bracken:
Insta: https://www.instagram.com/wuulhu/
Twitter: https://twitter.com/wuulhu
The See Monsters are Dean Hunt (DJ/Production) & Bracken Hanuse Corlett (Live-Visuals). They have been performing across Turtle Island since 2011, initially as members of Skookum Sound System and now as their current audio-visual duo. Both artists retain sonic and visual connection to their Indigenous lineage and bring forth a fused performance of Northwest Coast bass and moving light and images. They are known to transform the spaces they work in - moving fluidly from art gallery, to community space, to dance floor.

Dean has been DJing and producing music for 15+ years. He digs into the realms of bass music with a heavy Northwest Coast influence. He also practices full-time as a contemporary artist working within the Heiltsuk traditions of painting and carving. Bracken comes from the Wuikinuxv and Klahoose Nations and works in a variety of media including digital design, painting and sculpture. He has recently been creating stories and drawings for 2D and 3D animation.
----
Thursday, May 17th
Doors at 10pm
Copper Owl, 19+
$10 at the door only

PGNB occurs on unceded Coast Salish Territories*, specifically of the Lekwungen and WSÁNEĆ peoples. As an event that focuses on building artistic and cultural bridges, we acknowledge the rich cultural history of the many peoples and rituals that have been affected by the ongoing process of dispossession and colonialism. We hold this understanding in our interactions and engagements with this land and its people.