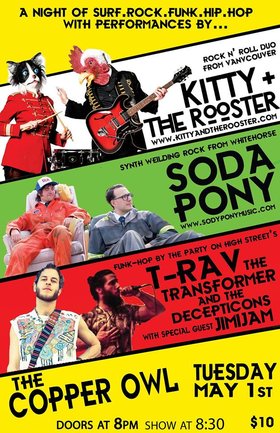 Event Archive - A night of Surf.Synth.Rock.Roll.Funk.Hop! with live musical performances by:: Kitty + The Rooster, Soda Pony , T-Rav the Transformer

Soda Pony (Whitehorse) http://www.sodyponymusic.com
With one full-length album already tucked into their waistline and another currently being cooked up in the kitchens/studio of Old Crow Recording, Soda Pony truly kills during their live performances. Hamilton, playing bass synthesizer with his left hand while also hammering at his drum kit, keeps the course steady for Tentrees' hooks and leads, alternating between organ and crunchy electric guitar. Meanwhile, the duo trade off vocals (frequently even in the course of the same song), adding to their charismatic, playful dynamic. The songs are clever, musically sophisticated, tightly arranged, and most of all, performed with original, forceful spirit.

A new project by T-rav The Transformer (of The Party on High Street) focusing on material that spans a 7 year period of solo musical production. Studio beats and hip-hop flows have been reworked and adapted for a live band performance. Joining T-rav will be long time collaborator and prolific m.c. JimaJam. Backing them on stage will be The Decepticons, a band of brothers, featuring members from The Leg-Up Program and Spaceport Union. A set of music, unheard and unseen, raw and transformed.