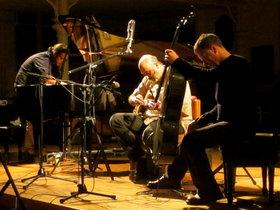 Collateral was formed in 2014 at a suddenlyLISTEN concert in Halifax. The concert and recording were so strong and the shared bond between the musicians so great, that the concert’s music was made into a CD for release.

In 2017/18 Collateral is touring Canada to celebrate the release of their independently released recording. There have been concerts in St. John’s, Charlottetown, and Halifax in November 2017, as well as spring shows in Rimouski, Montreal, Toronto, Vancouver and Victoria. The tour will disseminate the special live music this improvising trio makes, informed by contemporary classical, Middle Eastern musics, and free jazz—all fused together with a very approachable result. The musicians play and create together with a wide variety of approaches to their instruments, from the most familiar sounds to fully extended techniques. The audience will hear the full range of musical execution happening simultaneously! The result is colourful, expressive and powerful.