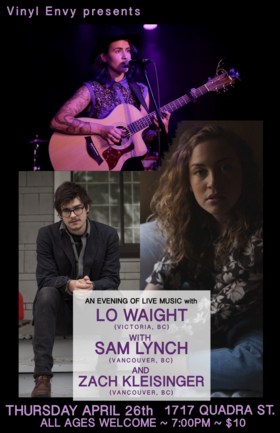 Lo Waight (Victoria, BC)
Lo Waight is a singer/songwriter based out of Victoria, BC. She is the front woman of Lo Waight and The Rattlesnakes and one of two female leads in her newest project Lorah the Band. Lo has been writing her own songs since she was 12 years old and has been singing long before she even understood what the lyrics to songs meant. Most recently, Lo has been involved in the Women for Women music project highlighting some of the women in the Victoria music scene http://www.danicyrcreative.com/women-for-women.html

Lo’s projects are becoming more well known around town, from Upstairs, Darcy’s Pub Westshore, @Lucky Bar, The Duke Saloon, RIFFLANDIA FESTIVAL with the snakes in 2017 to the upcoming Blender at the Mac May 25th and Rock The Shores July 13-15th 2018.

with
Sam Lynch
https://www.youtube.com/watch?v=EQovCVcVZzg
Vancouver alt-folk artist Sam Lynch is a wanderer and a restless mind, who sings her heart onto her sleeve by way of reflective, honest lyrics, and a nuanced, emotionally transparent live performance. She stands armed with a guitar and a voice that carries echoes from decades passed, yet still commands space in the current tapestry, garnering her comparisons to the likes of Feist, Phoebe Bridgers and Margaret Glaspy. The stark honesty in Sam’s writing translates a sense of immediacy to her stories: some very personal and detailed, others more sweeping and symbolic. Sam seeks out the sweet spots where vulnerability and strength meet, and where guarded hearts find companionship.

and
Zach Kleisinger
https://youtu.be/JhBENdOihU4
In 2014, Moosejaw native Zach Kleisinger took out his walking shoes and journeyed across the country playing street corners, bars, coﬀee shops, and venues - whoever would take in the determined, travelling poet. Zach landed in Victoria, B.C. to work with old friend Sam Weber, who produced his debut EP, “Between Cities”. The songs released on the EP captures an honest authenticity with a youthful curiosity. His brooding tales, gravelly vocals, and meandering guitar reflect the folk-fused blues of Bob Dylan, the earnest optimism of Jack Johnson, and the sonic style of Bruce Springsteen. The upcoming year will see him release his follow up EP, tour the west coast to continue building a faithful fan base, hitting small grassroots festivals, and taking his position in Canada’s folk landscape as a voice to be reckoned with.