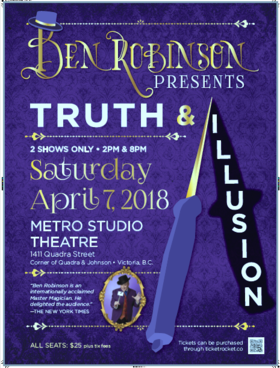 We are very excited to announce on Live Victoria that Magician Ben Robinson is returning to Victoria BC for 2 special shows.

For the whole family, Master Magician Ben Robinson returns to Victoria with his original bag of tricks and illusions. A hilarious, wonder-inducing performer - he is unlike anything you have ever seen. Ben Robinson is an unpralleled story teller who throws knives - he's changed lives. His performance exudes positive energy.
This is a MUST see performance featuring illusions never before seen. You will be enthralled by this man who has caught bulllets in his teeth at Houdini's grave and entertained at the Base Camp of Mount Everest. The New York Times reviewed his show as "Ben Robinson is an internationally acclaimed master magician. He delighted the audience!"