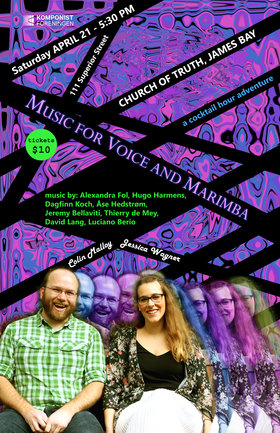 Join us for a short and intense "cocktail hour" adventure (no alcohol served/allowed, this refers to the time of the event only), expected to last 1 hour and 15 minutes at the most, where you will experience new music including two world premieres, as well as what is known a classic in the vocal repertoire from the 20th century; Luciano Berio's "Sequenza III" for solo female voice.

This concert is produced by Hugo Harmens, with financial support from the Norwegian Society of Composers (NKF).