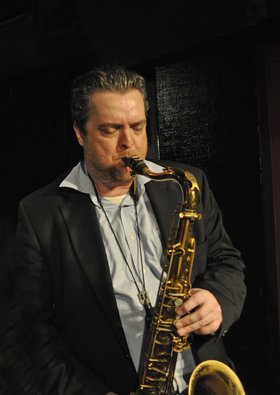 On April 14, 2018 The Victoria Jazz Orchestra will be paying a musical tribute to Ross Taggart. Ross was born and raised in Victoria, BC and was known as a jazz saxophonist and pianist and was active at a high level from the time he was a teenager on Canada’s West Coast. A consummate mainstream jazz player who was equally formidable on both of his instruments, Taggart accompanied such legendary players as Benny Golson, Dr. Lonnie Smith, Phil Woods, Clark Terry, and Fraser MacPherson. He taught at Capilano University and was married to pianist Sharon Minemoto.

Taggart became hooked on jazz at 14, and once said that hearing an Oscar Peterson album prompted him to trade all his rock records for jazz albums. He began playing clarinet at age nine or 10 and switched to saxophone at 14, and had played piano from a very young age. His musical heroes included Bill Evans, Dexter Gordon, Duke Ellington and fellow Vancouver saxophonist Campbell Ryga.

After losing his battle with kidney cancer in 2013, two of Ross' closest friends, bandleader and composer Jill Townsend and her husband, guitarist Bill Coon took it upon themselves to pay a musical homage to Ross by orchestrating a number of his compositions for a large jazz ensemble. The product of their endeavor became the album "Legacy" featuring many of Vancouver's finest jazz musicians, and of course Ross Taggart's wonderful compositions. The Victoria Jazz Orchestra will be joined by Jill Townsend and Bill Coon on April 14 at Hermann's Jazz Club to perform this music here in Victoria.

A prolific composer and arranger, Jill Townsend is the leader of the critically acclaimed Jill Townsend Jazz Orchestra. The Canadian National Jazz Awards twice nominated the Jill Townsend Jazz Orchestra for Large Ensemble of the Year. Their recent recording Legacy, featuring the music of Ross Taggart (Cellar Live 2015) presents new arrangements by Jill Townsend and Bill Coon and was voted #1 in CBC’s “Top Ten Outstanding CD’s of the Year”. Jill characterizes her writing style as both lyrical and personal. She has composed and arranged music to feature several guest artists appearing with her large ensemble including Dr. Lonnie Smith, Ian McDougall, Jiggs Whigham, Campbell Ryga and Brad Turner.

This is an event not to miss.