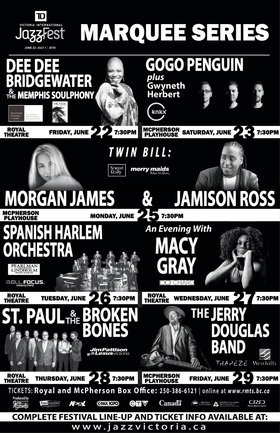 Jerry Douglas is universally hailed as the world’s most technically skillful and innovative Dobro player. With 14 Grammys on the mantel and performance credit on over 2,000 records, it’s hard to think of anyone who’s had more influence on bluegrass, newgrass, country rock, and the many other variants of acoustic Americana. Douglas is best known for being a key member of Alison Krauss & Union Station since 1988. Although most often called a bluegrass virtuoso, Douglas has invariably hopped over narrow genre definitions in search of greater musical freedom and radical expressiveness. From blazing Jimi Hendrix covers to jazzgrass anthems in challenging time signatures, Jerry Douglas is to the dobro what Jimi Hendrix was to the electric guitar. Currently touring in support of the 2018 Grammy-nominated What If, and accompanied by his most versatile band ever, Douglas’s musical vision adds elements of funk, rock, and jazz to his bedrock bluegrass sound. This six-string master with the fluid fingers has always been a step ahead of nearly everybody else! Christian Sedelmyer violin, Daniel Kimbro bass, Mike Seal guitar, Doug Belote drums, Jamel Mitchell saxophone, Vance Thompson trumpet

Ever popular and always dazzling, Victoria’s Marc Atkinson Trio continues to elicit national and international praise for their sizzling blend of post-Django gypsy jazz, Broadway show tunes and anything else that catches their fancy. No stranger to JazzFest, guitarist Marc Atkinson is equally well known on his own or in the frontline of those ama... more info
Submit info on this show to our admins