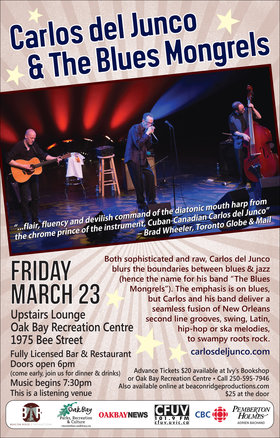 Music: Jazz / Blues
Born in Havana, Cuba, Del Junco (loosely translated "of the reeds") immigrated with his family at the age of one. He bent his first note on a harmonica when he was fourteen, making his debut with his high school math teacher at a student talent night. In his early 20's Del Junco was immersed in a visual arts career; he graduated with honours from a four year programme, majoring in sculpture ( click here to see photos ) at the Ontario College of Art. Sculpture has definitely had an influence on his outlook on music: "Music is just a different way of creating textures and shapes."

Playing a ten hole diatonic harmonica, Carlos has developed the unique ability to play chromatically by using a recently developed "overblow" technique taught to him by jazz virtuoso Howard Levy. Overall, this approach to the diatonic harmonica, although much more difficult to achieve, is in many ways more expressive and communicative than the mechanized tone produced by the chromatic harmonica . Carlos is one of the few pioneers of this overblow method, bringing musical credibility to what has still been considered by many in the music industry - a fringe folk instrument. The sophisticated sound produced by Del Junco is at once sensitive, soulful, and sexy while never forgetting the rawness inherent in blues music.

The Upstairs Lounge at Oak Bay Recreation Centre is a licensed restaurant and bar, doors open at 6 pm for dinner service, the concert starts at 7:30 pm