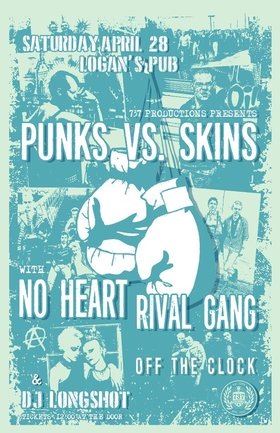 Headlining the night we have Victoria Oi! darlings, NO HEART. They are set to release their newest LP on LSM Vinyl, entitled 'Can't Get Out', as a follow up to their wildly successful split record released in 2017 with The Opposition. Featuring members of Last Crusade, Thankless Graft, and Emergency, these guys pull no punches bustin' out hit after hit after hit. Not to be missed.

Coming at you in the second round, from the ashes of The Excessives, rise Rival Gang, belting out tunes about doing drugs and getting arrested in that classic West Coast Skate Punk style.

Opening up the night we have a band that you will most likely NOT SEE AGAIN FOR A VERY LONG TIME, Off The Clock. It's basically if 4Skins, Combat 84 and Negative Approach had a baby. There will also be a release out by these guys in the near future as they are going into the studio to record as we speak!

We also have a very special guest joining us this evening bringing you only the finest vinyl all night. DJ Longshot. If ya know, ya know.