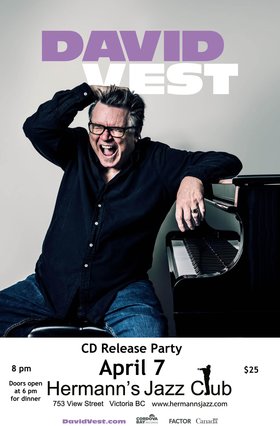 Music: Jazz / Blues
An event not to be missed. Come join the fun as Cordova Bay recording artist David Vest and his band unveil brand new songs from their latest album. David’s previous release was a record of the year nominee at Canada’s national Maple Blues Awards, and this new one will hit the charts running. The band includes Damian Graham, Ryan Tandy and Tom Bowler, plus frequent special guests.

They don’t come any more real than David Vest, a four-time winner of the Maple Blues Award for piano player of the year. His bio reads like the history of rock n' roll and blues. He's among a select group that includes Ronnie Hawkins and Jerry Lee Lewis.His songs have been covered by artists ranging from Tammy Wynette to Downchild, whose version of David’s "Worried About The World" gave the band their first number one hit.