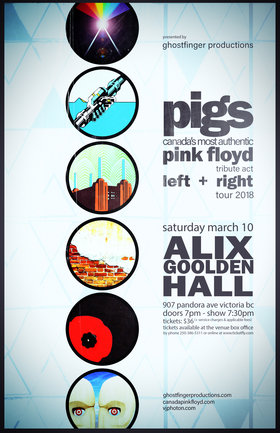 Music: Pop / Rock / Indie, Tribute / Cover
Formed in 2008 in Victoria, British Columbia, PIGS: Canada's Most Authentic Pink Floyd Tribute have spent ten years perfecting their craft in front of sold out audiences throughout Canada. On their Left + Right Canadian Tour, PIGS are bringing an epic and rare treat for Pink Floyd fans - the band will be performing selections from the entire Floyd catalog, including a few special surprises from Floyd solo records. In addition to classics from legendary albums like Dark Side Of The Moon, Wish You Were Here, Animals, and The Wall, the band will showcase material that has rarely—if ever—been performed live by Pink Floyd.

Using authentic gear, the band recreates the sound and live concert experience of 70s era Pink Floyd. Pink Floyd's live show was always a huge part of their appeal – and Pigs have been working to keep that experience alive for generations to come. They have the voices, the mannerisms, the authentic gear, the lights, lasers, visuals, and the sound. The band and their lighting, sound, and visual designers are all Floyd aficionados and are coming together to create for you an incredible night filled with music, lasers, and the glow of a giant Mr Screen.

PIGS is the most authentic Floyd act around, with the right people, equipment, and performances to give you an incredible musical experience you will never forget. http://www.canadapinkfloyd.com

Formed in 2008 in Victoria, British Columbia, Pigs have been amazing audiences ever since with their dynamic re-creation of one of the world's favourite rock groups. Pigs' claim to fame is their authenticity, which means looking, sounding and feeling like the real Pink Floyd in their hey-day: the '70s. Audiences can expect long, pyschedelic jams t... more info
Submit info on this show to our admins