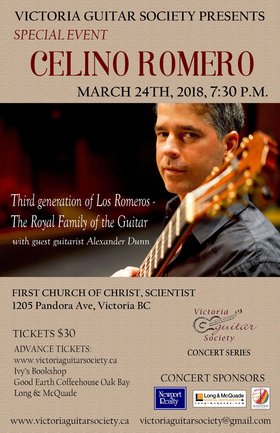 When Celino Romero joined the all-family Classical guitar quartet, Los Romeros, in 1990 he ushered in the third generation of the group’s esteemed history. Established by Celino’s grandfather, father and uncles in their native Spain, Los Romeros have been performing together since 1960 for audiences worldwide.

They are regarded by the New York Times as “The Royal Family of the Guitar.” Celino was joined 6 years later by his cousin Lito, who stepped in to replace their grandfather. Los Romeros have performed for dignitaries worldwide, including two American Presidents, Pope John Paul II and the King of Spain. In 2007, Los Romeros were granted The Recording Academy’s President’s Merit Award from the GRAMMYS in honor of their artistic achievements. Celino frequently performs as a soloist in recital and with major orchestras. In his first Victoria visit, Celino Romero will perform solo pieces and duos with Alexander Dunn.

All tickets for this concert are $30 and can be obtained on the Victoria Guitar Society website as well as at the following locations: Long & McQuade, Ivy’s Bookshop, Good Earth Cafe (1971 Oak Bay).