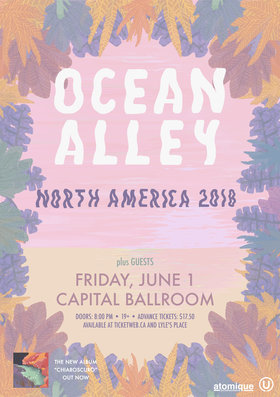 Music: Pop / Rock / Indie
Ocean Alley continue to solidify their place as one of Australia’s most exciting independent bands, with their sophomore album ‘Chiaroscuro’ set for release on March 9 via UNIFIED Music Group. The album will feature singles ‘The Comedown’ and ‘Overgrown’, along with new single ‘Confidence’ which is a melting pot of pure groove.

The band will celebrate the release of the album with their largest Australian headline shows to date in April & May, alongside their appearance at Groovin the Moo nationally.

Following on from their 2016 full length debut Lost Tropics, Ocean Alley have worked hard on the road, taking their unique brand of psychedelic rock across the world, with sold out shows in the UK, Netherlands, Germany and New Zealand, along with their home country of Australia.

With multiple tours across the world to follow this year, Ocean Alley are set to rapidly build on the incredible DIY growth of their eclectic music and emphatic live show.