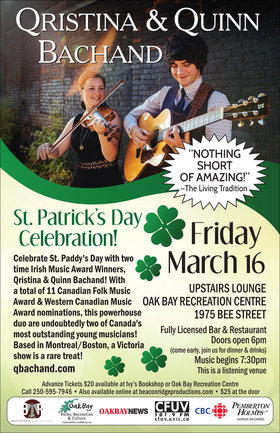 Born on Canada’s West Coast, with its signature embrace of experimentation and improvisation, siblings Qristina & Quinn Bachand have developed their own ‘voice’, exploring various musical traditions, fusing styles such as Old-Time, Celtic, Folk and Jazz to create their own distinctive sound.

With Qristina’s shimmering vocals and inspirational fiddling and Quinn’s old –soul mastery to all things stringed, this brother and sister act clearly hit the mark with the music industry earning accolades and international touring opportunities with the likes of Ashley MacIsaac and Natalie MacMaster. The duo won 2010 Top Traditional Group and 2011 Top Duo at the Irish Music Awards as well as eight nominations at the Canadian Folk Music Awards and Western Canadian Music Awards!

With a hint of grunge, a dash or noir, a healthy sprinkling of Celtic and a dollop of rootsy goodness, they engage contemporary listeners with jaw-dropping effect. They artfully meld heart-swelling, stomp and clap Celtic Roots with progressive Indie Folk, with results that are arresting, provocative, stimulating and thoroughly intoxicating.

Now living in Montreal and Boston respectively, a Victoria show by these two talented siblings is rare treat you don't want to miss!

The Upstairs Lounge is a licensed restaurant and bar, doors open at 6 pm for dinner service, the show starts at 7:30 pm 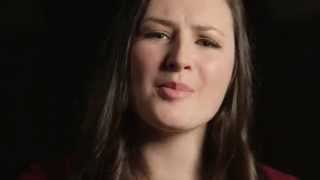