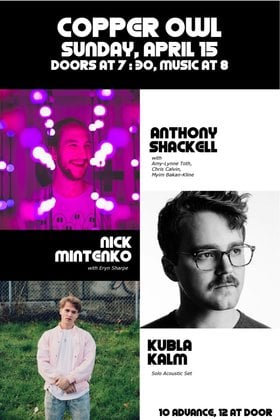 Music: Folk / Celtic / Latin / World
Anthony Shackell, Nick Mintenko, and Kubla Kalm team up to bring you a night of acoustic and laid back music.
Doors at 7:30, Music at 8.
Tickets 10$ advance (available soon), or $12 at the door.

Hailing from Vancouver, Canada, Anthony Shackell is now a Victoria-based musician. A multi-instrumentalist, songwriter, and performer, he can be often be found playing trumpet with MYLA and Phonosonics, in a practice room, or writing his next work. He draws on influences from artists and groups such as Donovan Woods, Hiatus Kaiyote, Greg Holden, Lawrence, and Busty and the Bass, and is always looking to add a new twist to the music that he writes.

Anthony will be joined by the following personnel:
- Amy-Lynne Toth on Violin
- Chris Calvin on Upright/Electric bass
- Myim Bakan Kline on Drum Kit

Anthony is rearranging most of his music for a 4 piece group, so even if you've heard it before, you haven't heard it like this.

Nick Mintenko has toured Canada, Europe, and the United States with some of Canada’s finest Folk and Jazz acts (The Marc Atkinson Trio, The Bills, West My Friend). In 2017 Nick debuted with positive reviews as a solo artist with his record “What I Thought I Knew”. His second, yet untitled release is scheduled for spring 2018. The new record features powerful vocal performances, and a unique songwriting palate that draws from all of Nick’s influences including Dave Mathews, Owen Pallet, Jeff Buckley, Duke Ellington, Carlos Jobim, Radiohead, and many more.

Nick's influences are married in his compositions. A love of lyricism for songs that can bring people together by speaking to the heart is met by a love of Jazz for expressive exploration and blistering improvisations and fused together by an imaginative composition style that, at times, abandons traditional song form and focuses instead on a stream of consciousness style of bridging ideas and themes.

Nick will be joined by Eryn Sharpe on vocals.

The new solo project of Kiaran McMillan (from Victoria's own Electric Sex Panther), Kubla Kalm comes to you to create a lush, smooth & funky atmosphere for you to enjoy and engage with. Kick back and relax to the sounds of the city, rare funk grooves and smooth neo-soul!

I've been playing music nearly my whole life, and have played the bass obsessively since I turned 17. I have been gigging the whole way, and have had regular paid gigs on bass for the last year. My tastes range quite a lot and I'm open to playing most styles of music. more info
Videos:

West My Friend - No Good Monster