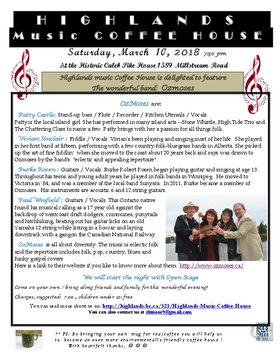 Patty Castle: Stand-up bass / Flute / Recorder / Kitchen Utensils / Vocals.
Patty is the local island girl. She has performed in many island acts --Stone Whistle, High Tide Trio and The Chattering Class to name a few. Patty brings with her a passion for all things folk.

Vivian Sinclair : Fiddle / Vocals. Vivian’s been playing and singing most of her life. She played in her first band at fifteen, performing with a few country-folk-bluegrass bands in Alberta. She picked up the art of fine fiddlin' when she moved to the coast about 20 years back and says was drawn to Ozmoses by the band's "eclectic and appealing repertoire".

Burke Rosen : Guitars / Vocals. Burke Robert Rosen began playing guitar and singing at age 13. Throughout his teens and young adult years he played in folk bands in Winnipeg. He moved to Victoria in ’84, and was a member of the local band Sunyata. In 2011, Burke became a member of Ozmoses. His instruments are acoustic 6 and 12 string guitars.

Paul Winfield : Guitars / Vocals. This Ontario native found his musical calling as a 17 year old against the backdrop of westcoast draft dodgers, communes, ponytails and hitchhiking, beating out his guitar licks on an old Yamaha 12 string while living in a boxcar and laying downtrack with a gangon the Canadian National Railway.

OzMoses is all about diversity. The music is eclectic folk and the repertoire includes folk, pop, country, blues and funky gospel covers.

We will start the night with Open Stage